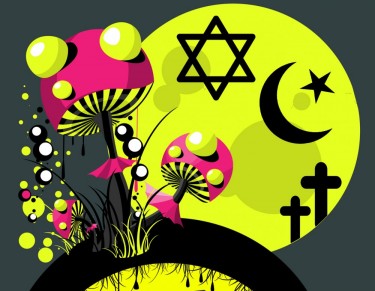 There is a theory that the three biggest religions were founded on the ideals of consuming psychedelics. That’s right, your Christian, Jewish or Muslim relatives are actually part of a Mushroom Cult that devolved into the religious dogma you know today.

Some of you may be thinking, “That’s a whole lot of bullshit!” but there’s actual evidence to suggest that these major religions did indeed find its origins in psychedelia.

The Sacred Mushroom and the Cross

The origin of this theory takes root from the work of John Allegro who wrote the book “The Sacred Mushroom and the Cross”. In his original piece – he claimed that Jesus was a fictional representation of the Amanita muscaria mushroom.

For those who don’t know what the Amanita Muscaria mushroom is – you’ve all been exposed to it if you’ve played Mario Bros. Yep, the one that makes you “grow”.

According to Allegro, the basis of Christianity stems from fertility cults who were known for using psychedelia within their rituals. In his book, “The Sacred Mushroom and the Cross” he dives into a complex and deep exploration of the concept. By the end of the book, you’re like – “well damn! Seems like Jesus was a Mushroom!”

However, before you go run and tell your folks that they are in fact mushroom worshippers – Allegros work has had some criticism in the past. The rejection of this theory was known as the Wasson-Panofsky Interpretation.

Gordon Wasson, one of the best known ethnogenic scholars rejected Allegros work on the comment from an art historian Erwin Panofsky, who claimed that the evidence Allegro was citing – specifically artwork in a 1291 C.E French monastery which depicted the Amanita Muscaria – was in fact a stylized Christmas Tree.

The problem however, is that it looks nothing like a Christmas Tree and absolutely like an Amanita Muscaria.

Later on, the Holy Mushroom idea came to be that modified Allegro’s work. In the follow up, the author J.R Irwin re-examines the dissonance between the theories and actually went to go visit the different monasteries and examined the artwork firsthand.

If you have a subscription to Gaia, I highly recommend you check out “The Holy Mushroom” where they go into more details.

Now – when it comes to Irwin’s interpretation – Jesus did exist and some of the relics in the Bible were code for psychedelia.

For example, “Eat of my flesh” was not bread or anything of the sort but rather a mushroom. The “drink” could very well have been some form of DMT.

Of course – this is all just speculation at this point, but when you consider what Meso America refers to as the mushroom, things begin to take an interesting turn.

I once took some mushrooms in the mountains of Oaxaca where the shaman told me that the pre-Hispanic people of America referred to the mushroom as the “Piel de los dioses” or “The Flesh of the Gods”.

Sure – the fact that a group of people called it “the flesh of the gods” doesn’t mean that Jesus gave people mushrooms to meet god, but – at the same time, it is a peculiar coincidence don’t you think?

Why Christianity could very well have its roots in psychedelia

My argument for the pro-psychedelic origins of Christianity rests on the fact that Christianity is a compound religion. What do I mean by this?

The origins of most of the rites and rituals within the Christian religion has its origins in paganism. Pagans, were worshippers of nature. They frequently ate mushrooms like the Amanita Muscaria.

If you don’t believe me:

Easter celebrates the coming of spring and the fertility goddess Eostre. Why do you think there are chocolate rabbits and eggs? That shit don’t come in the Bible.

Three Kings Day has its origins in Italia with a small witchy lady called Befana who allegedly pointed the three Magi towards Christ.

Christians claimed it was for helping with conversions

Some pushback on the “pagan roots of Christianity” claims that early Christians incorporated these holidays to help with the conversion processes of these pagan tribes. Except, if they did that – then they would have directly contradicted the Bible which says that “Do not add to what I command you and do not subtract from it, but keep the commands of the Lord your God that I give you.” – Deuteronomy 4:2.

If the early Christians did indeed adapt the Bible to fit to the world of paganism, then they have effectively rendered the Bible a heresy according to the words of their own book.

Thus, you can either accept the fact that Christianity assimilated paganism into it for the sake of conversion – which contradicts the very instruction of the Bible and would ultimately render it a fallacy – or that it was birthed from psychedelia and pagan worship.

Either way – it seems that Jesus wants us to legalize mushrooms next? What do you think? 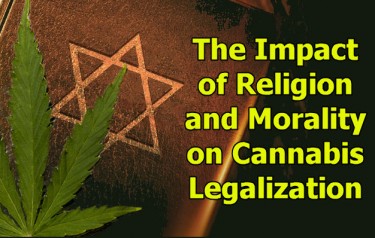 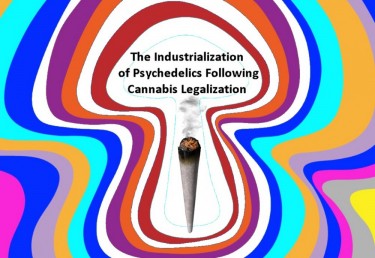 THE INDUSTRIALIZATION OF PSYCHEDELICS, READ MORE!