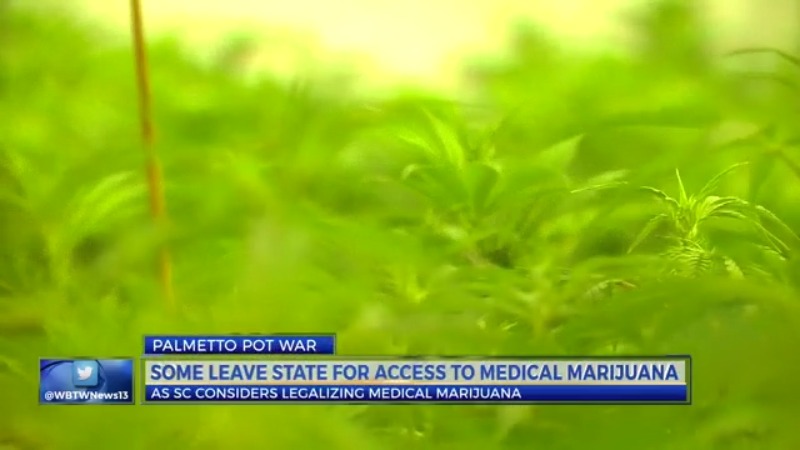 MYRTLE BEACH, S.C. (WBTW) — Thirty-six states have legalized medical marijuana, leading some to leave the palmetto state to get the help they need.

Richard Devonmille suffers from chronic pain. His doctors prescribed him oxycodone and he said it didn’t work. He had to move from Conway to Colorado to get relief.

“I decided to, rather than risk my freedom in South Carolina, I was going to go to a more friendly state,” Devonmille said.

Devonmille now lives in Florida, where he can also get medical cannabis.

“I’m in pain all the time anyway, but the marijuana helps with easing the pain,” Devonmille said. “Am I completely out of pain? No, I never will. Am I able to get around and function now? Yes, I was in a walker not long ago.”

While states like Colorado and California have brought in billions of dollars in marijuana sales, the highs have come with some lows. In California authorities are battling a marijuana black market. Local, state, and federal authorities confiscated more than 950,000 marijuana plants in 2019.

“It hurts the families because they can’t drink the water from the tap because it’s been polluted by illegal pesticides on these sites, it hurts the farmers who rely on healthy soil and access to safe water, and it hurts the Californians who play by our state’s rules when it comes to cannabis,” said Xavier Becerra, California’s attorney general.

“Violent crime in Colorado increased 26% between 2008 and 2017 for a population a little larger than ours, about half a million,” SLED Chief Mark Keel said during a 2019 senate subcommittee hearing.

“This is just another fear tactic that they’ve used to slow down something that’s moving forward,” said Frank Knaack, executive director of the South Carolina American Civil Liberties Union. “It’s no longer a question of if we’re going to have marijuana legalization in South Carolina. It’s just a question of when.”

Marijuana opponents also claim legalization leads to more people driving while stoned. A study from AAA looked at 10-years of traffic deaths in Washington. It found the number of fatal crashes involving drivers with marijuana in their system more than doubled since legalization.

Another AAA report shows 15 million drivers get behind the wheel within an hour after using marijuana, and nearly 70% of Americans believe it’s unlikely high drivers will get caught.

“You can get caught if you are driving under the influence,” AAA Spokesperson Rachel Sturm said. “Regardless of whether marijuana is legal in your state, it’s not legal for you to get behind the wheel impaired.”

AAA is against the legalization of marijuana, but advocacy groups like NORML said the study has flaws. For example, they said you can test positive for marijuana days after you use it.

In South Carolina, lawmakers are trying to pass a much more narrow legalization law, only allowing those with certain conditions access to medical marijuana, but they aren’t allowed to smoke it.
While it’s slightly more restrictive, the proposed law is similar to states like Arkansas.

Arkansas voters approved a medical marijuana law in 2016, but the first dispensary didn’t open for three years. Sean Sharp, who was in cancer remission, was the first to get legal marijuana in that state.

“It means everything to me,” Sharp said. “I’ll be able to spend more quality time with my granddaughter.”

“We’ve gone ahead and learned from the mistakes other states have made,” Davis said. “We have included in this bill, not only the authorization, not only the empowerment of physicians to do what’s right for patients, but the supply chain.”

While marijuana is not legal to grow in South Carolina, its cousin hemp is, and was set to be the next cash crop.

“It’s really hard being a parent and having to watch your child suffer and the doctor not have any answers on how to alleviate that suffering,” said Ralph, who owns RE Botanicals.

She found an alternative — CBD.

“We were able to remove 90% of her pharmaceuticals and we have about a 95% reduction in seizures,” Ralph said.

Ralph decided to get in the business as one of the first to grow hemp in South Carolina. Ralph now does everything from her farm in Conway — from growing, manufacturing, distribution, and sales in her store.

South Carolina started with 20 hemp farmers four years ago. That number soared to 300 but has slightly dropped off as farmers are dealing with too much supply.

“The infatuation, the chance for greater return than we had with some crops lead to nationwide a number of farmers adding this to their crop mix,” South Carolina Agriculture Commissioner Hugh Weathers said. “The uncertainty of the market, the value of the hemp, CBD oil, and other mainstay products just really plummeted.”

While CBD is legal on a federal level, the FDA has not regulated it. The agency decides how it can be used in products. Industry leaders said that was supposed to happen in early 2020. Then the pandemic hit. For now, how and where farmers can sell their product is limited.

“You need CVS, you need Walgreens, you need those places to sell these products to get it to the masses,” Ralph said.

According to the Colorado Department of Revenue, $10 billion of marijuana has been sold since it was legalized recreationally in 2014.

“A lot of the tax revenue that comes from that really goes to support wonderful social organizations that support impaired driving enforcement, addition counseling, youth prevention and education and a host of other things,” said Truman Bradley, executive director of Marijuana Industry Group.

To bring in big bucks back in SC, Commissioner Weathers said they’re looking to expand the hemp industry.

“Our hope is that we can work with the department of commerce, which we do,” Weathers said. “We can work with our manufacturers to get their thoughts on how we could build a industrial hemp fiber based industry in South Carolina to be a part of those supplies that they could use.”

Ralph believes medical marijuana could be a game changer for hemp farmers.

“For us to distribute, we’ve got to have avenues to present it and those dispensaries are key and important for farmers to be able to put their products in,” Ralph said.

The deadline for farmers to sign up to grow hemp is Feb. 28.

Weathers said farmers pay a fee to get a permit but that money wasn’t enough to cover the costs of hiring more people to oversee the compliance of the hemp program. It’s something he hopes the general assembly can address in its next budget.