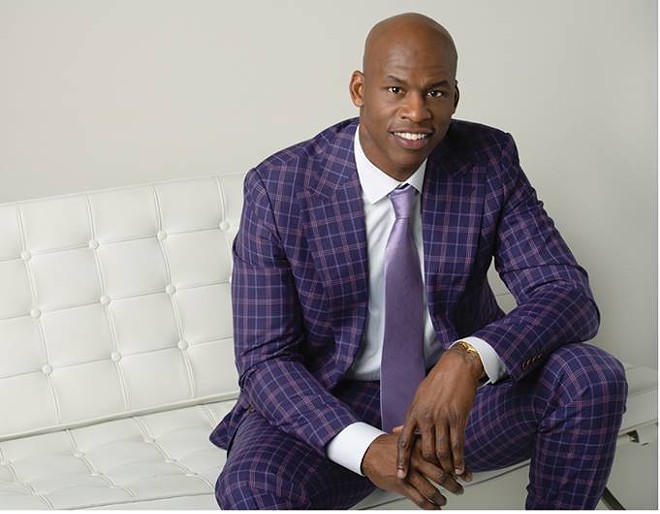 “I can be more successful in the cannabis space than I was 16 years in the NBA,” he says.

He’s gotten pretty busy with it since he left the league in 2014, with cannabis related facilities in several states. His Harrington Group of businesses — Viola Brands, Harrington Wellness, Butter Baby — is deep into the marijuana world. His grandmother’s name, Viola, is on the brand that produces cannabis extracts. Viola is also the name of Harrington’s dispensary, located at 4473 W. Jefferson, where a 48,000-square-foot grow facility is also housed.

Harrington Wellness manufactures non-psychoactive cannabinoid products. That means CBD oils, capsules and a topical cream aimed at the inflammation and paint of physical injuries. Harrington’s focus comes partly from having been a high-end athlete and experiencing the physical and mental duress that entails.

“It’s an alternative way for athletes to medicate to deal with inflammation and anxiety and hypertension compared to opioids, which are highly addictive,” he says. “Having cannabis as an alternative, it’s a major thing. Athletes really deserve this after all the things we put our bodies through.”

Butter Baby is a pre-existing business that Harrington invested in to make cannabis edibles. All told, he’s got a hand in businesses in California, Oklahoma, Michigan, Colorado, and Oregon with pending developments in a couple more — not to mention a recent brand partnership with rapper TI.

Harrington goes so much deeper into this than just getting himself a storefront and selling weed. There’s also a social equity program named Viola Cares in the operation in partnership with legal advocates Root & Rebound. It’s about education, entrepreneurship, expungement, and incubation in the effort to create thousands of new jobs. Some of the people who went to jail for their previous involvement with marijuana have the chance to turn that to their advantage.

“We work with some people doing expungement clinics,” says Harrington. “We have toolkits for those people who have been recently released from jail. … From the outside looking in the industry seems like it’s damn near impossible to be a part of, but it’s not just growing or having a retail location. You need to be open minded.”

That’s what brings him to Detroit next week: conversations with people about how to get into business. Harrington hasn’t been coy about his desire to help create more Black millionaires.

Meanwhile, Viola has been in Detroit for four years, and in the cannabis business for a decade. Harrington says the original move into medical marijuana was against the opposition of his financial advisor — an argument that Harrington has apparently won.

“When I got into this space it wasn’t as popular as it is now,” he says. “At that time my financial advisor couldn’t see that this was an unbelievable opportunity. I was getting in on the ground floor.”

A decade later and several enterprises larger, Harrington advocates for more research on medical uses. He’s talking about CBG, a non-psychoactive cannabinoid that may have anti-inflammatory properties, and CBN, which is mildly psychoactive but may help with sleep disorders.

It may be that Harrington is practicing the good work of sharing success with others and helping them find the way. And maybe he learned that from his grandmother Viola. She had severe glaucoma and sometimes could barely see. Harrington suggested, and eventually convinced her to try cannabis. It worked for her, restoring her ability to read the Bible. And Harrington chose her name for his first foray into medical marijuana.

So if you’re wondering how he managed to choose the cannabis business when others would stand in his way: It was a lesson his grandma taught him.

It’s a new era for marijuana in Michigan. Sign up for our weekly weed newsletter, delivered every Tuesday at 4:20 p.m.